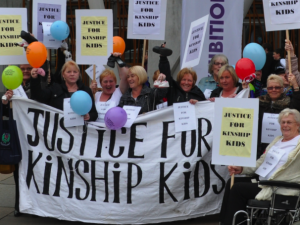 Kinship Carers from North Glasgow demonstrate outside parliament in 2010

Join us to tell the Scottish Government to stop discriminating against tens of thousands children in Kinship Care, and invest in supporting some of Scotland’s most vulnerable children.

Parallel local demonstrations will be held in other Scottish regions.

Please join us with placards, banners and loud voices! We need to show that Kinship Carers are not an isolated group, but have wide support. Come show your solidarity!

Letters of support to the Scottish Government and statements of support for the demonstration are also welcomed. Please get in touch with us at scottishkinshipcarealliance@gmail.com. More details below…

We feel we must urgently act now to stop the Scottish Government’s Children and Young People’s Bill taking away some of the little support which Kinship carers currently have under their proposed Kinship Care Order. This is a crucial time for children in Kinship Care and we need all the support we can get.

Kinship Carers save the government hundreds of millions of pounds a year in saved care costs, and provide the best caring possible for children unable to live with their parents. Yet, rather than being thanked and supported, they are being sidelined and denied even the most basic forms of support for the children in their care. This is a disgrace, and also a violation of Human Rights legislation on discrimination. Primarily, Kinship Carers are demanding basic therapeutic services to help the often traumatised children in their care integrate in schools and family life, and grow up healthy and happy.

The demonstration will put these demands to the Scottish Government:

1. Don’t cut the support for children in Kinship Care, as planned in the Children and Young People’s Bill.
2. We oppose the Kinship Care Order and demand an increase in investment for the support of children in Kinship Care.
3. End the discrimination between ‘formal’ and ‘informal’ Kinship children.
4. Children of comparable need must be treated the same.
5. Trauma and therapeutic services should be available to all Kinship children, despite their legal status. 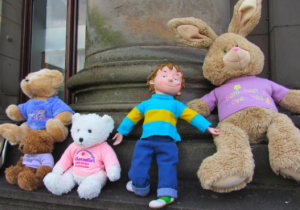 Please come to Edinburgh to join our demonstration at 11.30am outside the main entrance of parliament, or write letters or statements of support to us, or to the Minister for Children and Young People Aileen Campbell  (Aileen Campbell MSP, The Scottish Parliament, Edinburgh, EH99 1SP).

Do send this out far and wide and try to get as many folk along to Edinburgh as possible. We must show that Kinship Carers are not an isolated group who can be sidelined, but are widely supported by others.

6 thoughts on “Call out! Join us for a National Day of Action on Kinship Care”