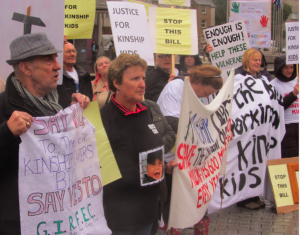 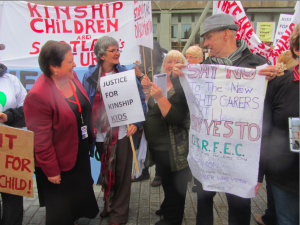 A number of MSPs (Bob Doris and Nigel Don (SNP), Jackie Baillie, Jayne Baxter, Paul Martin, Johann Lamont, Neil Bibby, Siobhan McMahon (Labour)) joined the demonstration to show their support. A group of cross party MSPs have also submitted more than 60 questions on the issue, which appeared in today’s bulletin, and some of which will be asked in parliament tomorrow. The questions were submitted by: Jean Urquhart MSP (Independent), John Finnie MSP (Independent), Neil Bibby MSP (Labour), Michael McMahon MSP (Labour), Jackie Baillie MSP (Labour), Alison Johnstone (Green Party), Bob Doris (SNP). The Minister for Children and Young People Aileen Campbell met with delegates from the Kinship Alliance after their demonstration and discussed some of their concerns with them. Kinship Care groups in Aberdeenshire and North and South Ayrshire and will write letters to the Children and Young People’s Minister in solidarity though they were unable to make the event. 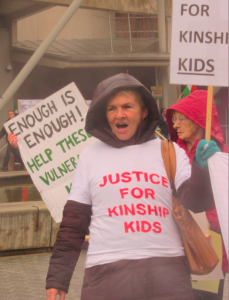 Kinship Carers at the parliament demanded that support for the vulnerable children in their care is increased, and not reduced – as planned by the proposed Children and Young People’s Bill which is soon to be debated in parliament, and has been opposed by Kinship Carers.They pointed out the discrimination between children in Kinship Care and foster, or residential care, which they say is a proven violation of the European Convention on Human Rights. One of the parliamentary questions submitted by MSPs will address the issue of the illegal discrimination between ‘Looked After’ kinship and foster children, who are treated differently under Scottish legislation. The question will state: 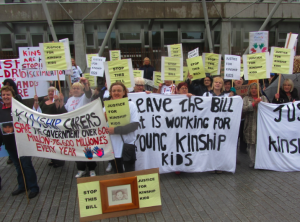 To ask the Scottish Government what changes have been made following the 2001 Munby judgement on differential treatment of formal kinship carers and foster carers.

The Munby Judgement was a precedent ruling which showed that the differential treatment of Kinship and foster children on the same legal status (Looked After Children) was illegal under articles 8 and 14 of the European Convention on Human Rights on discrimination. This ruling has now been tested across England making councils treat children equally, but has yet to be tested in Scotland, where inequality remains.

On Tuesday 24th September Chair of the Alliance Anne Swartz also gave evidence to the Education and Culture Committee on the proposed Kinship Care Order in the Children and Young People (Scotland) Bill, which the Alliance are opposing. The testimony received wide press coverage. She says: 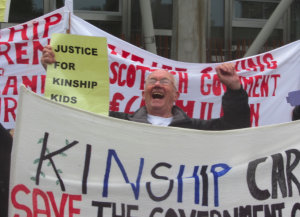 “Kinship Carers all over Scotland are angry at the way the children in their care are treated by the Scottish Government. These are the same kids who would have gone to foster or residential care but they have been taken in by a relative instead, where they have the best possible outcomes. Yet, the essential support services available to the kids if they go to foster care are denied when they are placed with family, leaving many traumatised and in poverty. 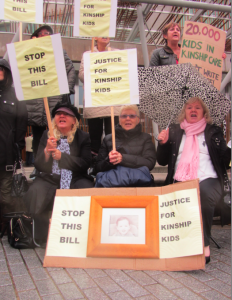 The Children and Young People’s Bill is going to cut the support for Kinship Care children even further. We are here in our masses to tell the Scottish Government that we won’t let kinship children be discriminated against any more. These children are Scotland’s future and should be treated equally to other children in care. We are demanding that trauma therapy, educational support and basic financial allowances are provided to all Kinship children as part of the new Bill.”

Another Kinship Carer, Jackie Lonie from Angus, explained why she was demonstrating: 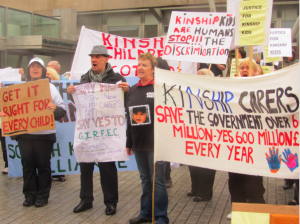 “We have knocked at every door for years to get the basic services for these kids but the Government and local councils seem to turn a blind eye to our plight. Meanwhile our support groups are swelling with grandparents struggling to cope with damaged children without help. We cannot stand by and see this generation’s human rights being ignored. The Scottish Government must stand by their word and get it right for every child. We will not stop campaigning until kinship children are recognised and supported.” 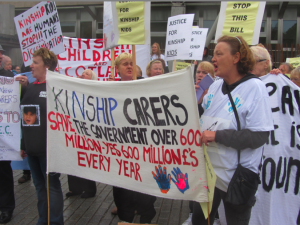 The Buttle UK’s comprehensive reports on Kinship Care reveal that 1 in 71 children in Scotland lived in Kinship Care in 2001, and the majority of those placements are informal, I.e unsupported by the Local Authority. Buttle UK claims that informal kinship carers save the taxpayer between £23,500 and £56,000 a year, despite many of these carers finding themselves in poverty, with 31% of these families unable to provide all of the eight basic items that most of us consider necessities, such as heating and winter clothes. Recent reports have also shown revealed that Kinship placements are rising rapidly, with five new placements each month in Dumfries alone1. 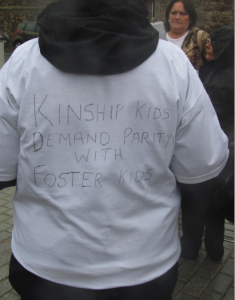 The Scottish Kinship Care Alliance made five demands to the Scottish Government at the demonstration:

1. Don’t cut the support for children in Kinship Care, as planned in the Children and Young People’s Bill.

2. We oppose the Kinship Care Order and demand an increase in investment for the support of children in Kinship Care. 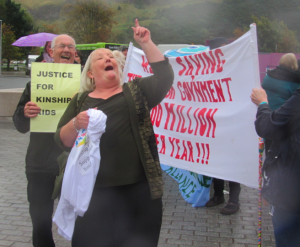 3. End the discrimination between ‘formal’ and ‘informal’ Kinship children.

4. Children of comparable need must be treated the same whatever form of care they are in.

5. Trauma and therapeutic services should be available to all Kinship children, despite their legal status.

Stephanie Lenehan, 21, was brought up in Kinship Care and still lives with her grandmother and carer. She supports the demonstration and says: 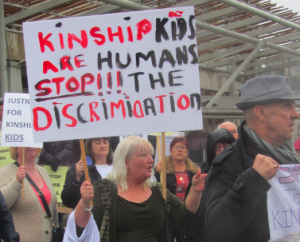 “Being brought up with my Gran was the best outcome for me as I still got to see my family and friends. But Kinship Carers like my Gran don’t get enough support or recognition and that has to change.”

Another Kinship Carer Tulip Rippingale from Dumfries and Galloway claims Kinship Care could save the government even more money long term if it was well supported: 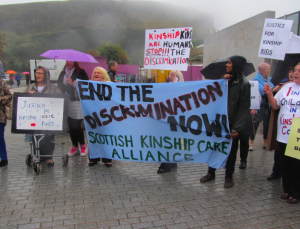 “Many grandparents and relatives do not take the children when they are at risk because they simply can’t cope without basic supports such as financial allowance to enable them to give up jobs, and respite for an occasional break. All of this and so much more is offered to foster carers, where we know the kids suffer and have poor outcomes, whereas Kinship Care helps the children maintain their identity and culture and remain with their family. We are not asking for much, just the very basics for our children’s survival and growth. If these supports were in place many more relatives would take in vulnerable children and take the pressure off the residential care and foster systems.”

The Herald – Kinship Carers are finding it hard to pay bills

The Herald – Martin Johnstone – Agenda: The generation that would be lost without the love of kinship carers 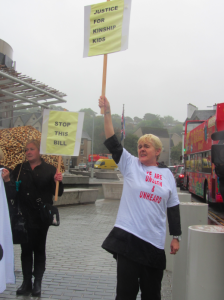 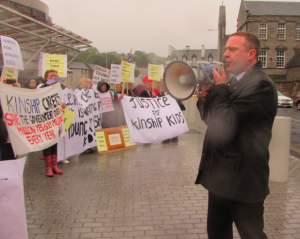 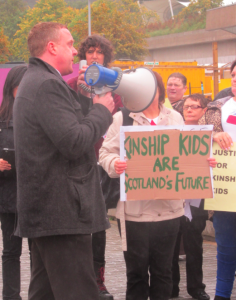 Bob Doris MSP gives his support to the group 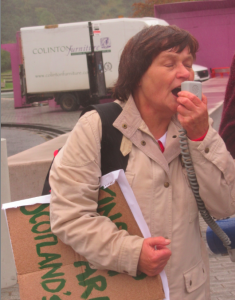 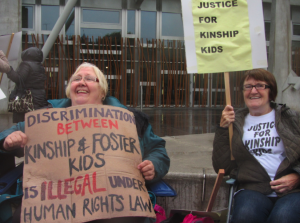 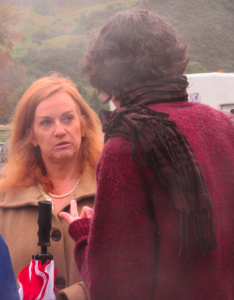 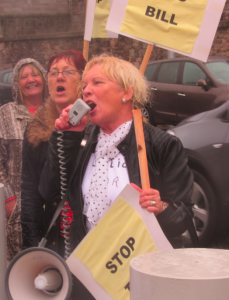 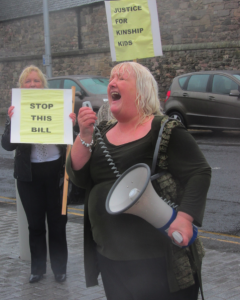 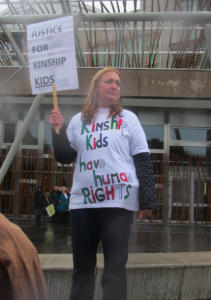 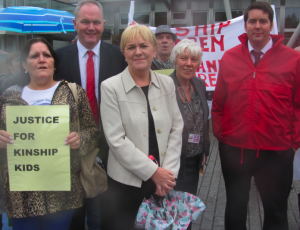 Leader of the Labour party Johann Lamont, plus MSPs Neil Bibby, Paul Martin and Jayne Baxter at the demo 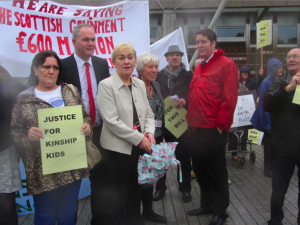 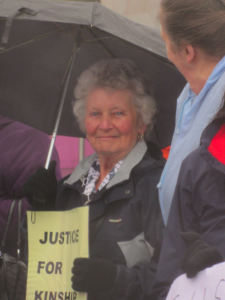 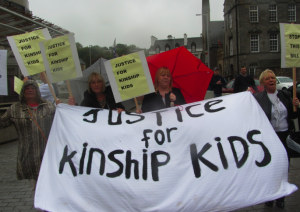 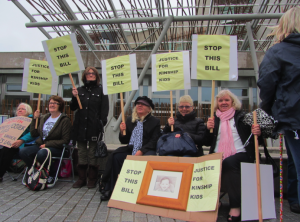 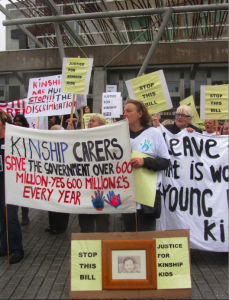 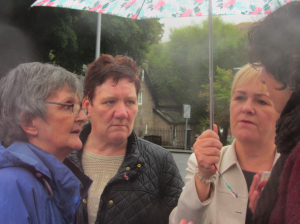 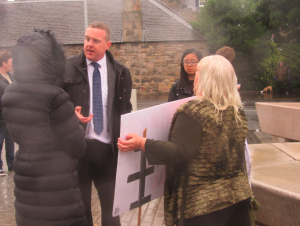