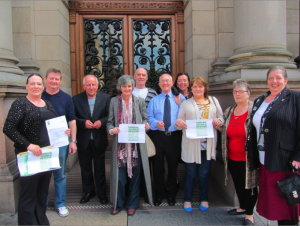 Glasgow City Council’s Public Petitions Committee today heard their first petition since the scheme began in May 2012. The petition was lodged by Kinship Carers from the New Fossils Grandparents Support Group in East Glasgow who claim that the children in their care are victims of institutionalised discrimination by the City Council. Three Kinship Carers from the New Fossils group appeared before the committee and made their case.

They noted that In December 2007 the Scottish Parliament voted unanimously to pay Kinship children the same allowances as children in foster care by 2011 and Glasgow City Council (alongside others) signed a concordat to ensure this. By 2009 the Scottish Government had formally reneged on the agreement and claimed that it would be up to Local Authorities to pay Kinship Carers at their discretion. Glasgow City Council now pays ‘recognised’ Kinship Carers £50/week, but many are not even entitled to that as Social Work claim they were not involved in the placement.

The petition, authored by East Glasgow Kinship Carer Mary McPherson, goes on to give examples of discrimination the Kinship Carers have witnessed through their support group. It reads: 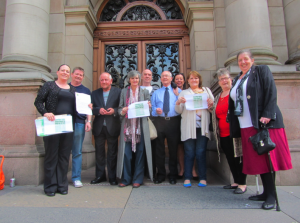 We believe that for years, Glasgow City Council has systematically operated an institutionalised social policy of discrimination, against Kinship Children…

…The following are examples of the discrimination, these children have faced for years:

Two children are removed from the family home, they appear before a Children’s Panel, both are placed on a supervision order, Section 70. Glasgow City Council becomes the corporate parent. Both children have the same legal status in law.

One child goes into “Foster Care”, and is immediately provided with a “start up” grant, to purchase emergencies. The foster carer is also given a “check list,” for Mothercare , for whatever is appropriate, i.e., beds, cots, prams, safety devices etc. They also receive a weekly allowance, for the child’s daily needs. They also receive double allowances for holidays, birthday and Xmas.

Kinship children walk away with Gran, with just the clothes they stand in. In the last few years they have received an allowance well below that of foster children, despite having the same legal status. This is discrimination.

Glasgow City Council should introduce the start up grants, and checklists, that apply to “Foster Children”. They should institute the same policy as regards holidays, birthdays and Xmas.

Finally, we would ask that Glasgow City Council issue a declaration of intent that will give priority to incrementally moving towards equality between Kinship children, and Foster children in care.

A few weeks ago Kinship Carers from across Scotland launched a new national organisation to act as a single campaigning voice for the rights of the children in their care. The Scottish Kinship Care Alliance(2) also claim they have formed the group to address ‘institutionalised discrimination’ from Local Authorities and the Scottish Government against the children in their care. Chair of the Alliance and Kinship Carer from Dumbarton Anne Swartz says:

“We are sick of seeing the children in our care suffer without the basic support from Local Authorities. Kinship children are routinely written off and discriminated against while foster placements have access to a wide range of support and services. Enough is enough. We have come together to put a stop to this institutionalised discrimination and fight for the rights of our children.”

Press coverage of the petition:

The Herald, Kinship carers say council is guilty of discrimination