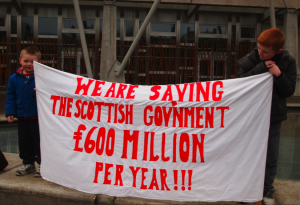 Response to preliminary Secondary Legislation on Children and Young People Act, parts 12 and 13.

1.1 In section 68 (3) we would once again dispute the definition of an ‘eligible child’ as (a) a child who the authority considers to be at risk of becoming looked after.

An eligible child should be any child living with another family member or family friend, ie in a Kinship Care arrangement (whether presently defined as ‘formal’ or ‘informal’). As we stated in our previous response to the preliminary secondary legislation in August:

‘We wish to deeply challenge the current definition in the policy memorandum which suggests that eligibility to supports under the KCO will be based on the degree to which the child is, or may become ‘at risk’. We argue that placements should be supported in order that they can remain stable, rather than only as a fire-fighting measure when they are becoming unstable. Evidence shows that early intervention and continuity in support are critical to the positive development of vulnerable children.’

All Local Authorities should use an assessment that is legislative to determine whether a child is in any form of Kinship Care arrangement. There should be no room for variation in interpretation between Local Authorities, which risks exacerbating the current postcode lottery.

We would be happy to work with the Scottish Government on designing assessment criteria which are fair, transparent and inclusive.

1.2 In addition to the current suggestions for services that could be provided to ‘eligible persons’ we would add:

1.3 We agree that Scottish Ministers should by order make provision about

a)when or how relevant services specified in an order under section 68(1) are to be provided,

(b)when or how a local authority is to consider whether a child is within paragraph (a) or (b) of section 68(3),

(c)when or how a local authority is to review whether a child continues to be within paragraph (a) or (b) of section 68(3),

We are keen that this legislation and guidance is strong enough to ensure an end to the current ‘postcode lottery’ of services and support for kinship families. A certain level of support should be guaranteed across the Scottish regions by the legislation, with flexibility on additional support. Our experience with Local Authorities is that kinship provision has often been cut when other budgets are tight, or in some cases LAs have sought to interpret legislation on family support in such a way as to do the minimum possible, leaving many kinship families in distress. The the section on ‘Services and Support’ (p.67) in The Poor Relations – a report on kinship care by Buttle UK and Bristol University published in 2013 states:

We had expected that the informal kinship carers would largely be unknown to Children’s Services. We were therefore surprised to find that, since taking on the child, most carers (71%) had contacted Children’s Services to ask for help. However, carers had rarely received the assistance they sought and were occasionally told that if they could not manage alone, the children would have to be fostered or adopted. Whilst these

sometimes harsh attitudes are likely to be underpinned by attempts to contain costs, there appeared to be a ‘silo’ mentality whereby kinship carers were expected to manage without assistance.

(2) An order under subsection (1)(d) may include provision about—

(a)circumstances in which relevant services specified in an order under section 68(1) may be provided subject to conditions (including conditions as to payment), and

(b)consequences of such conditions not being met.

We are concerned that kinship families may be asked to pay for, or repay the cost of services. We would be keen to know more, and try to ensure that this part of the legislation is very tight to avoid any potential abuse by Local Authorities.

We would be keen to meet with the Bill team to look in more detail at the type of child-centred services that kinship carers have found effective. We have a number of examples of effective services from our network including Circle, FASS Glasgow, Notre Dame and others.

2.0 We are very concerned about the proposed cut off age for support at 16 years, especially as the need for support can increase during teenage years when childhood issues can surface. We note this in relation to the recent increase in the age limit for foster support to 21 years. Kinship children should not be treated differently as they have comparable needs to foster children.

2.2 We would agree that a start up grant of £500 is ‘essential’ for all kinship placements to ensure basic items can be purchased. Since this is a one off payment to support the early stages of a kinship arrangement we do not see the issue with time-limitation here.

Firstly, we do not believe there is any evidence to suggest that the needs of kinship families are reduced after three years. In fact in many cases financial constraints become harder as the children get older and carers have to reduce their work hours or give up jobs. Again, we would note that there is no such cut off for financial support for children in foster care, and kinship children should not be treated differently since they have directly comparable needs.

Thirdly, we have asserted previously that the financial review of Kinship Care allowances should not be de-coupled from this legislation. It is our hope that a national allowance, equal to the allowance for children in foster care will be set for all children in any form of Kinship Care arrangement (irrespective of legal status), thus removing the need for ‘transitional support’ all together.

The Scottish Government should legislate for a basic level of support, which should be equal and comparable to the support offered to foster care placements (excluding the financial payment foster carers receive for their caring service). This is appropriate as foster children have comparable needs to children in kinship care (and would be placed in a foster arrangement if a kinship placement was not available).

We are grateful for the opportunity to comment on this draft secondary legislation at this stage, and would be keen to meet with the legislative team to expand on and discuss issues around the degree of flexibility which should be afforded to Local Authorities, and the type of child centred services which would be more effective and useful to kinship families.